It’s all beginning to get to us. We are tired. Progress has slowed. gumble grumble grumble

Lets start from where we left off, a highpoint. We stayed at the Lawton’s house. Mike worked with my Grannie as a grad student.Papa got in touch with them and thats how we were able to stay with them. We paddled away from Mike and the Lawton family well rested, well fed, and clean. 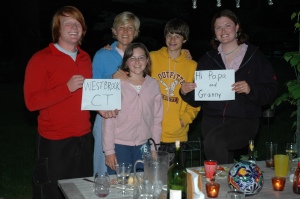 The paddle from there led us to Clinton and the Indian River Marina, where we were greeted with our first “fan” type, who wanted to take photos with us and shake our hands. It was surreal to be a “star.” Rob, the owner of the marina came out and greeted us and showed us where we would be staying the night.  He left to get a different car and left us to chill for an hour before dinner with his friends and family. I didnt move a muscle for the full hour. Exhaustion was setting in. We went to his house and met the most beautiful German Sheppardi have ever seen, walked around in his fabulous and large organic garden, met his friends and wife, and enjoyed a very yummy dinners and stories. We didnt get back to the marina until midnight. We crashed hard that night.
The next morning, because of the current, we would not leave until 11am. We slept in and went out for a HUGE breakfast. This delay of course set us up for a long day but it was nice just the same. We were headed for the Thimble Islands. They are an absolutely amazing place and perhaps my favorite place so far… perhaps. It was like going back in time, yet living in the comforts of home. No electricity. Use water sparingly. KeroseneLamps. Gas for heating water and cooking. Quiet. 32 homes and no road of pathway other than the natural layout of the island. Really really REALLY cool place. We stayed with the Millspagh family on Money Island where we were treated to smoked salmon with lemon and onion, quinoa salad, fried potatoes, bread, green beans, corn, and plenty of it! We slept so well that night it was ridiculous. I didnt want to close my eyes though to the tranquil view out our window.
The next morning, we helped out around the place and they called friends, trying to find us a place to stay for the following night. We didnt have anywhere to stay. It just so happened that the roomate of thier neighbor, also the sister of Rick and Nancy from ealier on the trip, lived in Milton CT and we were welcome to stay with them. Amen! We left the Thimbles reluctantly and got paddling. The day was relativly calm and uneventful until we were in the middle of the New Haven crossing. Waves started to whip up and we were tired. It took us forever to get across to the Milford area. I was crashing hard, and of course, we were stressed. When we finally landed on the beach by Bill and Susans house, I could barely speak and I was not happy. Of course, in meeting strangers every day, we have learned how to put on a happy face and pretend that what we just did moments before was not epic, we are not tired, we are happy, and do not need alone time… ever. This was taking its toll though by this time. Bill was very hospitable to us, especially considering that his wife Susan could not be around due to a retirement dinner AND the fact that he didnt know us from adam and we were sleeping in his house with only a few hours notice. We took showers, drank some beer with him and picked up a “apizza” for dinner. We learned that within 100 miles of New haven “pizza just isnt worth eating. its worthless i tell you!” We went to bed early that night.
The next day we awoke to POURING rain and high winds. Panic went through my mind. We could NOT paddled this day but asking to stay another night was a hard thing to do since we felt to out of place and completely indebted to these people for the first night. Sheepishly we asked for another night and Bill said, “I dont care if you stay another night. I sure wouldnt go out in this weather!” whew. relief. We talked about kayaking for a really long time and then we sat around and watched the rain for a while. It was a really depressing day outside. trust me. Finally Bill offered to take us into new haven to have the “best pizza on earth.” who are we to not JUMP at the invitation. wouldnt you? we made our way to Frank Pepe’s in New Haven and he was right. It was the best pizza i have ever had. We had a white clam pizza and a pepperoni. Both scrumptious. Frank Pepe’s is quintessential:New Haven-style pizza, also known as apizza, popular in southern Connecticut. It has a thin crust that varies between chewy and tender, depending on the particular establishment. The default version is a “white” pizza topped with only garlic and hard cheeses; customers who want tomato sauce or mozzarella cheese have to ask for them explicitly. Apizza has a very dark, “scorched” crisp crust that offers a distinctive bitter flavor, which can be offset by the sweetness of tomatoes or other toppings.

Taken from wikipedia, they even have a photo of Franks pizza on the pizza page. Its phenomenal. Its worth stopping in if you are EVER anywhere CLOSE to new haven. trust us. we eat a lot of pizza.

That night we did nothing until we went to sleep, only making it halfway through “The Shipping News” before we turned in for the night.

The next morning we were on the water by 6am paddling. It was still gloomy outside, like it had been for WEEKS. the rain was holding off but our low spirits were not. I listened to David Gray for hours, which was perfect music for the mood. Probably didnt lift my spirits but there was no way i could stomach anything upbeat. We were both tired. Tired of new people, tired of new places, tired of kayaking, and tired of being out of touch. It was all getting to us. We stopped. We pulled up to a hotel on the beach, got a room, and crashed by noon. The rest of the evening was consumed with watching crime shows on the 8 channels that the hotel had. Depressing? I think so.

To pep things up in a BIG way, the next morning we caught the train to NYC to visit my good friends Annie and Mike from Chicago. They just so happened to be visiting from the windy city, and we were able to work out time to see them. It was so fun. We say the statue of liberty and ellis island, and then walked for hours trying to find a place to eat. we didnt eat until 3:30, settling for Ruby Tuesdays in Time Square. Uncreative but starving middle class americans. o well… it was goooooood. It was really fun to see them and really helped with the morale. It DID rain all day though…

When we got back to stratford, still raining, we walked over a mile to the nearest grocery store through mud and poison ivy. We bought provisions for the following day since we checked the marine forecast and read about the horrible weather still to come. grrrrreat. After getting our groceries, and being completely soaked and exhausted, we got a cab back to the hotel.

Weather was calling for 10-15 knots with gusts up to 30 for the next day, and the same for the following days. If you want to depress us, tell us that we are stuck in a boring nothing place, paying to much for a hotel and nothing that we can do about it. We sat in that hotel room all day… watching NOTHING on tv until we went to sleep that night.

Yesterday, having gone completely bananas the day before, we threw good judgement out the window and paid for it later on. We paddled. We paddled across the entrance to bridgeport and by the time we reached the other side, we were at eachothers throats, pissed off, tired, and pretty shaken up by the weather and wind because I wanted to make the open water crossing instead of sticking to land like dan wanted. We werent going to make it the 10 more miles to our destination. We found a place to keep our boats and walked the mile to the hotel… Probably was the ONLY thing that could have made me smile/laugh at that moment, happened. We walked up to the same exact hotel that we had stayed at with William and Jamie on the epic road trip up to Lubec, waaaaaaay back in September last year. We had to laugh. Honestly. I crawled into bed at 2:00 and didnt budge until 6 this morning.

Dan got up and got ready to paddle, and I did too. Then I broke. “Please dont make us paddle today. I just cant do another day in the boat with the weather and my freaked out brain!” So we went back to sleep and slept another three hours until we walked here to the library.

The weather MUST get better. We really want to make it to NYC and see the big apple with RachelAnn and Nathan, and Mary Poppins, and shopping, and mailing home our winter wear and switching it up for summer. We need a pick-me-up. We are low.

WHAT IN THE WORLD NEW ENGLAND? LETS WORK ON THIS HORRIBLE WEATHER!! ISNT IS SUMMER PRACTICALLY???

This is the map we created with our Spot Satellite Messenger of the whole trip.